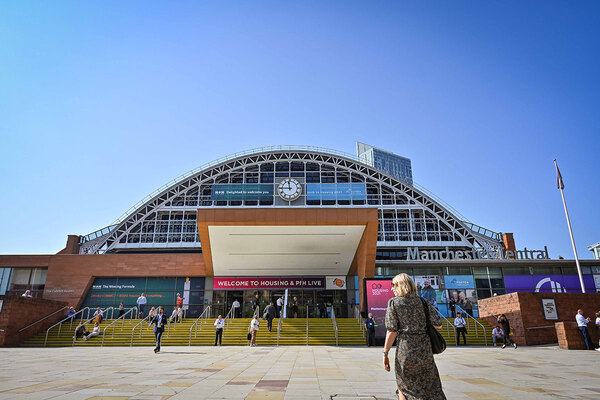 What a busy week it was. For the first time in more than two years, the sector came to Manchester this week for the 2021 Housing Conference.

For the largest conference of its kind in Europe, thousands of exhibitors, speakers, attendees and government ministers came to Manchester Central, which felt like a big reunion for housing professionals.

And between punching and chattering – which of course included the words “long”, “time”, “no” and “see” – there were some great sessions that covered a number of the biggest issues the industry is currently facing.

Inside Housing’s news team was on site every day and most nights, and our news for each day can be found in the links below.

Various topics were dealt with on the first day. The annual Savills and Social Housing survey provided key insights into how the sector is changing. After years of focusing on new supply and construction goals, it seems like the sector has shifted its focus more to existing stocks. This can be seen in the statistics: 85% of the 138 respondents from the housing association put investments in existing systems at the top of their list of priorities. It’s easy to see why, what, given the myriad of problems landlords face regarding inventory – be it building security, net zero, or the increasing scrutiny of repair issues across the industry.

The main attraction on the first day was the housing minister. As the auditorium waited for Christopher Pincher to arrive on stage, there was an audible groan as it was confirmed that it would be a recorded message.

In truth, the speech lacked any real substance and involved ruminating on government policies and actions that were largely known. What it didn’t include, however, was mention of building security or existing tenants. With 85% of associations making inventory their top priority, many were understandably upset.

Tuesday was Opposition Day, which featured high-ranking Labor politicians. The day started with Shadow Housing Secretary Lucy Powell discussing Labor’s housing approach. This included a plan to tighten control of landlords who rent properties to housing benefit recipients. She took action to ensure that the conditions for these people were standard and monitored, rather than the “unconditional” approach which she believes is currently in place.

After Ms. Powell’s keynote speech, we saw Andy Burnham take the stage for a one-on-one interview. His speech focused on calling on the government to support his plan to upgrade Manchester. After 12 months of testing Whitehall’s relationship with the Greater Manchester Mayor, it will be interesting to see how the government reacts. Mr Burnham says he is ready to draw a line in the sand.

While on the third day the crowd may have been a bit smaller, there were many more sessions taking place at what I previously referred to as the “Glastonbury of Housing”.

To continue this theme, conference headliner Robert Jenrick took the stage on Thursday after an impressive improvisation by the head of the Chartered Institute of Housing, Gavin Smart. Okay, he took the stage on a big screen via a video link, but at least he was live and took questions.