The country’s white households have roughly $ 1.3 trillion more aggregate wealth than the country’s Latinx households, and about a quarter of that gap can be attributed to housing inequalities, according to a Zillow analysis.

The total wealth of all US Latinx households is $ 1.03 trillion, compared to $ 2.36 trillion for an equivalent number of white households, according to the Federal Reserve Consumer Finance Survey (SCF). In other words, Latinx households have less than half the wealth (43.7%) of their white counterparts – but the gap could narrow significantly by the end of the decade if the recent trends in Latinx ownership broadly reflect the recent trends in Latinx ownership Have consisted.

Latinx households have gained significant wealth since 2016, when the relative wealth of Latinx households compared to white wealth bottomed at 24.8% during the Great Recession, its lowest level since 1989. The improvement was largely driven by increases in Homeownership that is expected to continue into the next decade, with increases in housing alone will bring Latinx’s relative wealth to more than half that of white wealth by 2031.

Housing differences account for about a quarter (24.6% or about $ 326 billion) of the total wealth gap of $ 1.3 trillion, and most of the housing gap is due to differences in home ownership. The Latinx population is younger than the white population, and since younger Americans generally have lower home ownership rates than older Americans, the headlines in Latinx household numbers are initially deflated. Even so, Latinx households have lower home ownership than white households across all age groups, which means Latinx families have fewer opportunities to build wealth from home wealth increases. However, in part because the Latinx population is getting younger and growing, the largest increases in total ownership are expected to occur over the next two decades (through 2040) come from new Latinx homeowners, according to research by the Urban Institute.

But owning a home is only half the battle. Differences in the value of homes also drive housing disparity, and this is where the story becomes more complex. Latinx households are more focused on more expensive markets, with the proportion of the population living in California, Texas, and Florida being heavily over-indexed and under-indexed in most of the Midwest, Appalachians, and the deep south. This concentration means that at the national level, the home equity carried by Latinx homeowners appears to be roughly the same as that of white homeowners, but this is only an illusion. To see the true extent of inequality, we need to control geographic location and look at the differences in local home values ​​for themselves.

Nationwide, the typical Latinx homeowner’s home is worth about 12.8% less than the typical white household: $ 246,300 compared to $ 282,400. And the gap for the large metros is often larger, reaching 35.3% in Los Angeles, the largest of the 50 metros analyzed in this work. This loophole, even in LA, is also a bit misleading, as Los Angeles, with such a high percentage of Latinx households, is also very expensive – which skews the national totals. The typical Los Angeles home is valued at $ 766,400, while the typical Latinx-owned home is valued at $ 581,700 – both of which are far higher than the typical U.S. home value (at the time of this analysis) of about 274,400 U.S. dollar. The spacing in other large metro with large Latinx populations varies widely: 20.1% in San Antonio, 11.8% in New York, and 6.6% in Miami. In combination with the home ownership gap, the following estimates of the total home ownership gap result.

For all homeowners, their primary residence is typically their largest asset, with a median (as per the 2019 SCF) of $ 226,000, an average of 57.6% of all assets held. For Latinx homeowners, primary residence is an even larger fraction of assets, averaging 72.7% of total assets, even with a comparatively lower median of $ 204,000. The next largest asset for homeowners is typically a retirement account, which makes up 13.4% of the assets of all homeowners. But few Latinx homeowners have high retirement savings, so the next largest asset is usually a vehicle with 9.6% of assets, followed by liquid retirement accounts with 5.7% of assets. This tendency towards non-appreciative assets shows the importance of housing in wealth accumulation for Latinx households.

The tenants’ greatest assets are usually vehicles, followed by liquid bank accounts (check / savings). These assets are usually not upgraded; their growth is linked to income rather than returns and, in general, the growth rate of non-residential property, especially for tenants, can be very low. If we keep these growth rates constant at the 30-year average, we can forecast the overall impact on wealth that would result from changes in home ownership and home value over the next decade.

Record the next decade

Housing will be an important factor in determining whether, and by how much, the racial wealth gap can be closed (or widened) over the next decade. Home ownership changes and home appreciation, under certain circumstances, could help Latinx grow its wealth by more than $ half a trillion, from $ 1.03 trillion to $ 1.54 trillion by 2031 – or contribute to a slight decline in Latinx’s net worth to approximately $ 1.01 trillion. In what is arguably the most likely scenario, real estate gains will cause Latinx’s assets to grow 23.1% (adjusted for inflation) to approximately $ 1.27 trillion by 2031. This would increase Latinx’s net worth relative to its non-Hispanic white equivalent from 43.7% to 51.0% (with scenarios going broadly from 40.6% to 62.0%).

Here are five scenarios to consider on current Latinx home development (we think the “slight slowdown” scenario is most likely, in part because the recent strong Latinx home gains have been more subdued in the latest available quarterly data ): 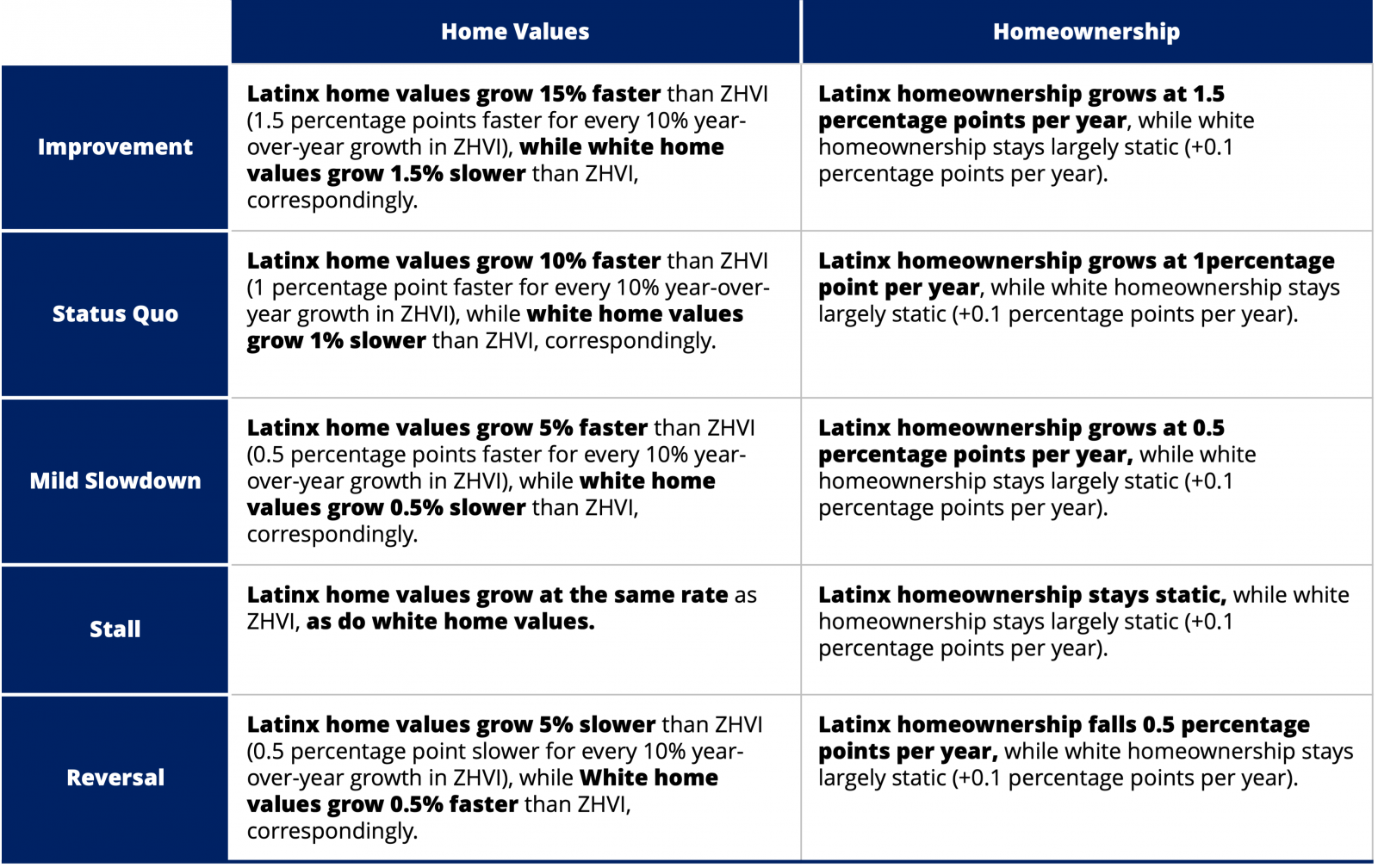 When it comes to home equity growth, there aren’t many cases at the national level where racial home equity growth has diverged by more than 10% – save for the Great Recession when it was noticeably bad. In mid-2017, Latinx property values ​​were growing 7.0% annually, compared with 6.2% for whites, a healthy gap. While the relative rate was around 5% in spring 2021, preliminary forecasts assume a decline over the course of the year. 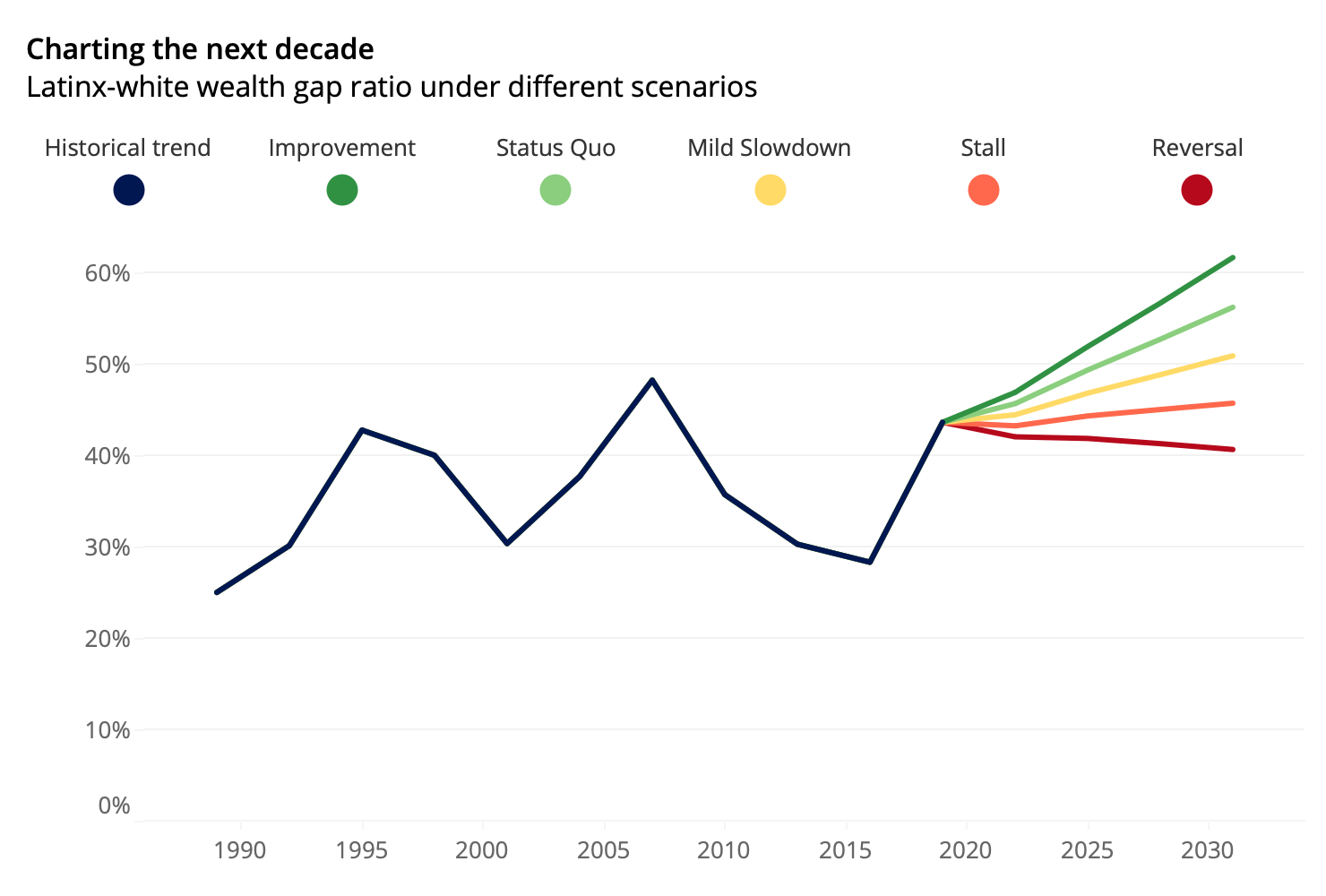